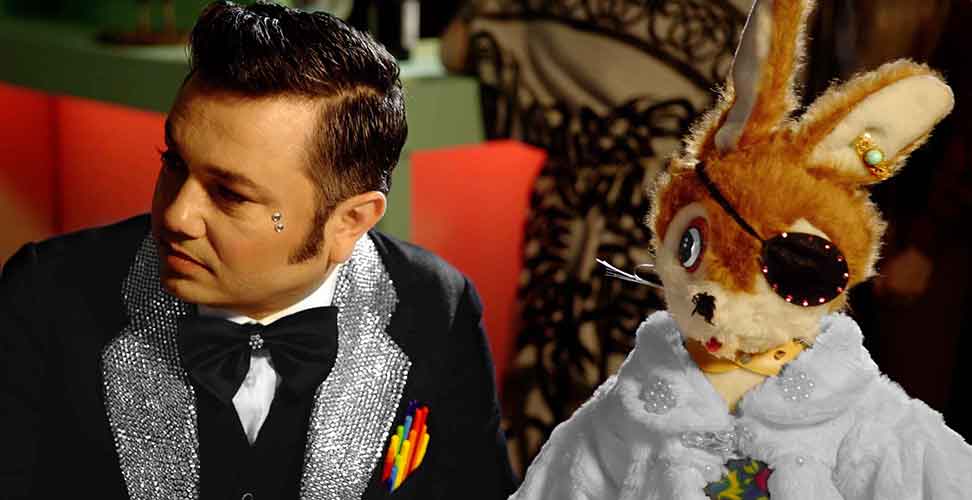 "Tomo y Obligo" is a short Music Video. Its core is a tango song

In the movie "Luces de Buenos Aires" made the same year this song came up.

and transformed into a contemporary/futuristic version. With help

a weird and fantastical Sci-Fi version of the song was made.

This movie stands for individual freedom

and questions stereotypes at every level.

YES THEY ARE CALLING THE BATMAN! 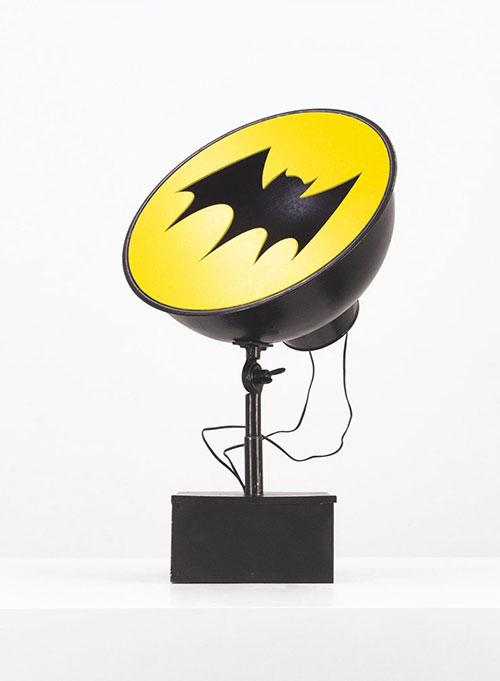 Yes, They Are Calling The Batman! is a kinetic sculpture

which can be called via telephone (Cell phone or landline.) .

The object will turn to the location of the caller.

This motion will be seen by the audience.

After getting in the right position the ultrasonic loud speakers

inside the sculpture will activate and form a Bat-Signal of invisible waveforms.

Animals (dogs, cats, etc.) and some sensitive humans will hear the sound. 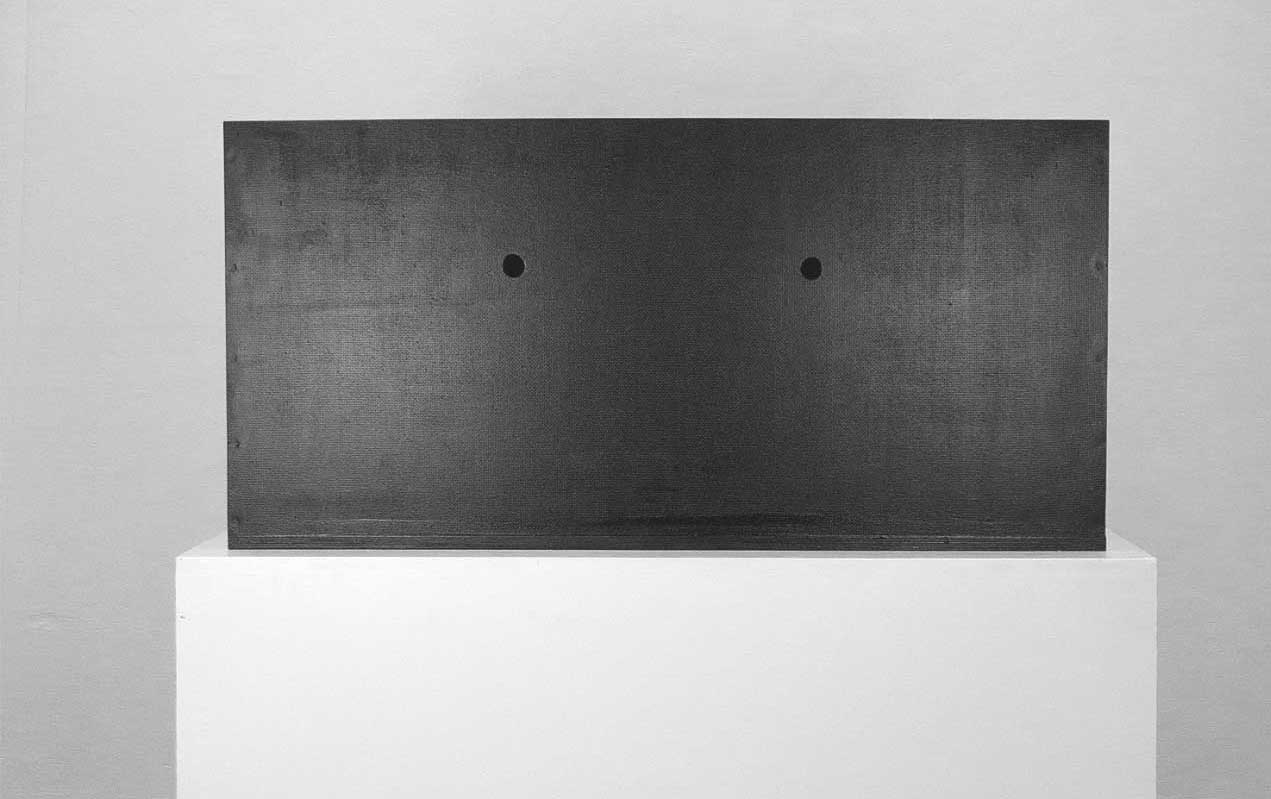 Rainbow Order is an interactive sculpture that creates a rainbow

by getting sent two text messages.

One message has to be WATER and the other must have LIGHT as its content.

They have to send it simultaneously

and should then look though the holes into the darkness of the box.

Inside that box which is exhibited evolves a small rainbow.

so that they enjoy this romantic moment even more. 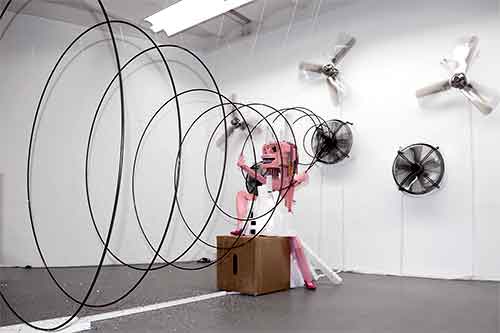 v e n t u s f l a t is a sculpture that will blow people's minds,

and cast away evil and bad thoughts.

This kinetic sculpture is a mash-up of different idols

representing godly entities from all over the world.

It symbolizes one of the forces of nature: wind.

Aesthetically, it is a borderline creature -

somewhere between the intense presence of a sacred piece,

and the recreational effect of an amusement park.

While standing in front of the sculpture, people are blown by several massive fans

- not in an aggressive way but for fun. It will touch them physically

and tickle them till they chuckle. Hair will whip around, clothes will flutter about,

maybe some hats will fly -

all for the enjoyment of the bystanders AND those being blown upon.

she/he has the chance to stop the fan by screaming a cheer of emphasis.

Hitting the right tone will stop the wind and the 'blown' person can walk on - relieved. 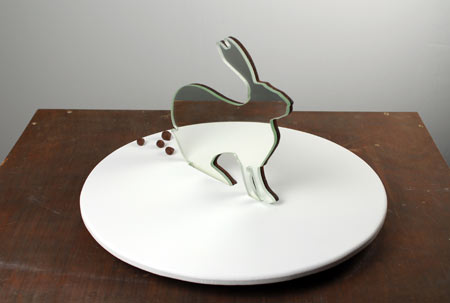 mirror sided and one rusty, steel sided half.

and will be used as a bearer of symbols and connotations.

A mashup out of Dieter Roth, Joseph Beuys, Jeff Koons and Albrecht D&uumlrer.

Like a collage of associations, a (re)combination of known sculptures

and images. A motor enlives the animal so it turns like a radar on its own axis

and sneaks through his territory. Inspects everything and mimics the viewer

at the same time. Reflecting him and inserting him into the sculpture itself.

Leaving the viewer inside the silhouette of the rabbit.

The chocolate balls - made of a special recipe - are almost symbolising

the four artists and are not proper to get eaten during the exhibition.

Although they are quite tasty.

THE METAPHYSICAL POSSIBILITY OF JOY

IN THE MIND OF SOMEONE UNHAPPY 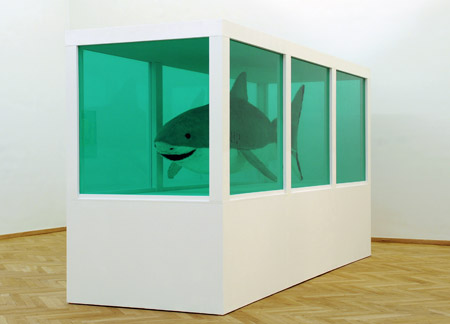 (...) Estrangement through an animal costume also leads to

the work &quotThe Metaphysical Possibility of Joy in the Mind

of Someone Unhappy" (2011). Of course the presentation of

a shark measuring over three meters and resembling a

stuffed animal is a satire of Damien Hirst's genuine shark

of Death in the Mind of Someone Living" (1991) presented

something which, in itself, was nothing out-of-the-ordinary.

Preserved sharks, at least those stuffed by taxidermists,

are familiar from museums for natural history. Introducing

it as a work of art into an institution for exhibiting

contemporary art, Hirst detaches the shark from all relevance

for the perspective of natural history and reduces it to

aspects of death and terror, and thereby to the visitor's

Just as the teddy-bear possesses nothing of the dangerousness

of a real bear and, as a play-doll similar to a person,

takes on only the soft, fluffy curves of a bear, so a

plastic-skinned shark, in spite of the same size, has none

of the death-connected attributes of the shark presented

Neubauer instead makes use of the Hirstian shark as that

which it long ago turned into, namely as a media-disseminated

icon of recent art history. Independently of contents and

context, the &raquoready-made« of the shark, just like the urinal

of Duchamp, has become a symbol of &raquomodern« art which says

less about art itself than about the media's perception and

dissemination of art. It is a schematization which is the

basis for every persiflage and exaggeration - the drag queen

just as the teddy-bear and the stuffed shark. (...)

Per Olaf Schmidt and Tom Sch&oumln 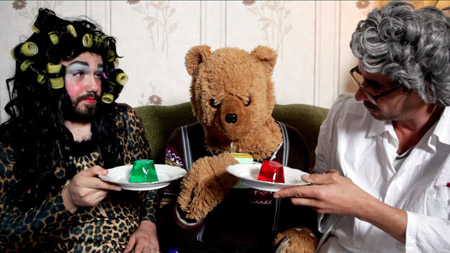 (...) There follows: a playlet entitled

Performance: by the dysfunctional nuclear family.

In the leading role: a seemingly depressive teddy-bear of

indefinite age which, although he is literally overwhelmed

with presents, endures his own birthday while sucking silently

on a straw. He ignores the blinking robot which is supposed

to become his friend, and likewise the cake and jello.

Sitting to his right and left are: the parents. On the right

is his mother, a garishly made-up, bearded lady with false

eyelashes and hair curlers, who fruitlessly tries to get him

instead seems intent on sucking his juice until the whole

affair is over. On the left is his father, almost as

indifferent as the son, a chain-smoking researcher, more a

crazy scientist than a well-behaved academic, who would

rather putter around his laboratory engaged in obscure

experiments rather than suffering the daily bleakness of

Mother and child, father and son can only enter into

relationships with each other in their imagination

here they are united in dance, in an absurd disco-fantasy

of ecstatic, liberated bodies, far from the unbearable

dreariness of shared meals, not without embarrassment and

yet all the more touching. In the fantasy, however, one of

the parents must always remain out in front&mdashan Oedipal

conflict, even if a symmetrical one: They compete with each

other for the favor of the child, with jello in either red

or green, and both of them are ultimately disappointed.

They seem to have ceased long ago to expect anything from

each other the bearded lady dreamily strokes the rubber

tube of the robot, but it as well is not capable of

restoring to her that which she has lost.

A sitcom without off-laughter, like a joke told endlessly

and thereby robbed of its punch line: A teddy-bear, a robot,

a bearded lady and a crazy scientist meet up with eachother ...

bearable, or a repetition of unchanging and meaningless

words and sentences which is even more unbearable

no laughter ends the torture, no crying either,

only a constant slurping.

Ultimately the only actions which help are sucking,

wine-drinking and smoking&mdashall the participants seem to

be caught here in their oral phase, passive, dependent on each

other yet incapable of entering into any sort of mutual

Thus a petty-bourgeois family drama is distorted to the

point of recognizability as freak show and B-movie,

midway between Fassbinder and Ed Wood, colder than death

FINALLY WE ARE ALL AN EMPTY ORCHESTRA!

in collaboration with Per Olaf Schmidt 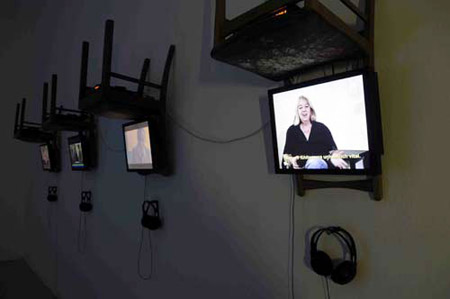 (...) Recent video works by Sebastian Neubauer depart from the

obvious path of role-changing and costuming. They demonstrate,

however, another form of distorting appropriation.

in order to distort them into a karaoke version and to

During karaoke evenings, the texts of popular songs are shown

on a monitor for the purpose of singing along.

Whereas karaoke performances are concerned with the imitation

of songs and pop stars, Neubauer is not interested in an

imitation of the actors and speakers in the films. On the

contrary, instead of speaking the lines of text, he sings

the dialogues and statements. The given image and text offer

stiff resistance to the sung version. With disregard to the

content of the texts and to the context of the films, Neubauer

distorts and shifts syllables and words, and he subjects image

and text to his own interpretation.

With the video belonging to the series and entitled &quotFreiheit

und Verantwortung" (&quotFreedom and Responsibility"), it is a

matter of a segment from a documentary film with the subtitled

translation of an interview with Jean-Paul Sartre, in which

he speaks about civic freedom and responsibility.

from Milos Forman&lsquos feature film about the American comic

Andy Kaufman, Man on the Moon (1999). With further excerpts

for instance from the American television series The Wire,

from the Late Night Show with David Letterman, from a film by

Birgit Hein, with whom Sebastian Neubauer studied, or from

an interview with the musician Ted Gaier, who speaks about

fears and the future.

Neubauer weaves together in his video series a close texture

of references to the world of television, film and

leeres Orchester" has the characteristics of an experiment

of personal appropriation through singing in which the

subjection of the initial material seems like a victory (...) 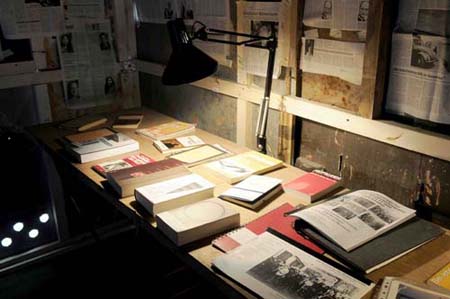 &quotDVD239" is an erratic essayfilm. It is made up of collected

clips and takes form within an associative and experimental

through the history of time, and combines these stories with

numerous anecdotes, which come across as being memories of

focuses on the fragmentedness of the complex

narration, but is also meant to allude to the obvious

unreliability of memory, which we in turn use to construct

By appearances, the film is a disorderly collection of travel

reports and research papers that deal with the abstract and

fleeting phenomenon of freedom, which is nonetheless utterly

there by subjective altercation - the observer is moved

to start out on a quest, meandering from island to island.

Production of this work began in 2002 with an initial trip

to Istanbul, and with the recording of field interviews

In 2011 all came together for an installation.

YES THEY ARE CALLING THE BATMAN 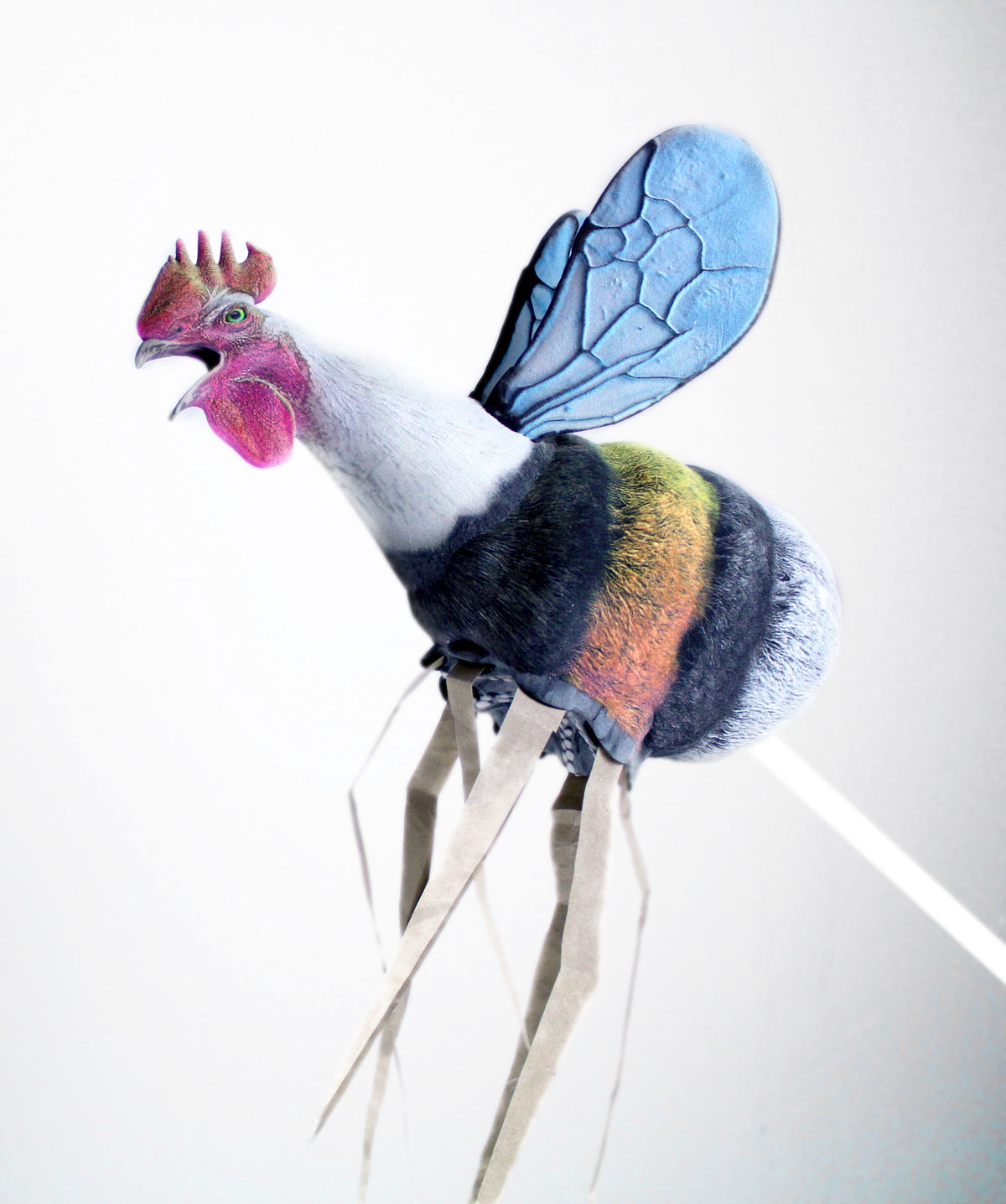